Geoffrey is a Gresley J50 tank engine who lives at Copley Hill.

Geoffrey was built sometime between 1926. Allen (then without a name), met him in 1948. At that point, Geoffrey was working at Copley Hill depot, in Leeds. During that time, he was much more of a caring engine than in his later years. In 1953, he was told to shunt Nigel into the shed as he needed cylinder repairs. Geoffrey thought that this was a waste of time. It seems likely that upon learning of the approaching end of steam, Geoffrey's caring attitude changed into a sarcastic, angered tank engine.

In 1959, Geoffrey was confused like the other engines about who moved Nigel to the Out of Use line, but when Deltic showed up in the yard, he thought that if more diesel engines like him turned up, steam would end. When Deltic revealed that it was Gronk who moved Nigel to the Out of Use line, Geoffrey became furious, and when the other engine interrogated Gronk, he demanded that Gronk was thrown out of the shed. Even when the others realised that Gronk had done it under the Foreman's orders, Geoffrey still thought that he should be kicked out. When Stephen asked the tank engines if that was what they thought, Geoffrey said yes. After Gronk left, Stephen angrily told the engines that the end of steam really was coming, and it shut Geoffrey up completely.

Later that year, Geoffrey's regulator broke, and the other engines sadly speculated that he would be scrapped. When workmen removed his broken regulator, Geoffrey protested and complained angrily.

Geoffrey was one of the last engines to be allocated at Copley Hill a few weeks before its destruction.

While once an overall friendly engine, the changes to the railways over the years turned Geoffrey into a grouchy and stubborn engine who was at first in denial about the end of steam.

Geoffrey is based on a LNER J50 (GNR Class J23) 0-6-0T. None were preserved but a replica is being planned. There hasn't been any progress yet but one day, Rail fans might end up with a new J50/2.

An animated photo of Geoffrey 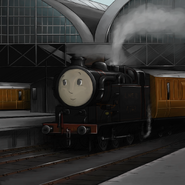 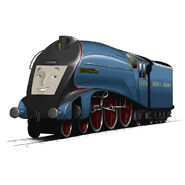 His Class A cousin

Gadwall, his cousin and another Class A

Green Arrow, his cousin
Add a photo to this gallery
Retrieved from "https://thebritishrailwayseries.fandom.com/wiki/Geoffrey?oldid=8700"
Community content is available under CC-BY-SA unless otherwise noted.